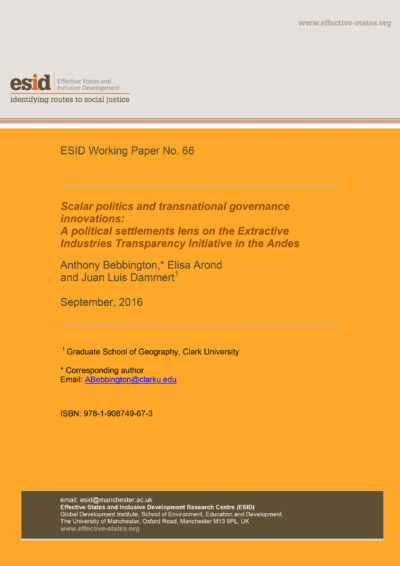 Scalar politics and transnational governance innovations: A political settlements lens on the Extractive Industries Transparency Initiative in the Andes

The Extractive Industries Transparency Initiative (EITI) originated in the international domain but can only operate if adopted at a national scale. How EITI unfolds in a particular country is thus a consequence of the particular interactions between domestic and transnational political processes, and among ideas, institutions and political interests existing at these different national and transnational scales. National politics is especially crucial to the forms taken by EITI. This paper addresses how national political settlements have led to diverse responses to EITI across three Andean countries: Peru (an early adopter); Colombia (a late adopter); and Bolivia (a non-adopter). We argue that national elites have taken up (or, in the case of Bolivia, rejected) EITI as part of a strategy to secure broader goals and to convey particular messages about the state of democracy and political priorities in their countries, including towards actors on the international stage. We conclude that the EITI, and the idea of transparency, are leveraged by national actors to meet domestic political goals and interests, even as these may also be intertwined with other international pressures and contexts. While EITI, and arguments over transparency, can affect the nature of the domestic political settlement, they do so primarily by helping deepen domestic political changes that are already underway and that were the same political changes that created the initial space for EITI.

Scalar politics and transnational governance innovations: A political settlements lens on the Extractive Industries Transparency Initiative in the Andes